If I told my friends in Los Angeles to come and eat in Beverly Hills, right on North Bedford Drive, shaking their heads would be probably the friendliest reaction I could expect. This is not a cool area, of ​​course, and most of the restaurants there are noisy, slick and simply characterless, or to say it another way, even more brutally: you really don’t want to spend your evening with the people here. Sometimes, though, it may be good to be a stranger in a city that you know quite well, but with far fewer prejudices than locals might exhibit. There are some people who would rather drive to Downtown LA, even though they live in Westwood, before deigning to eat out in Beverly Hills.

Anyway, I once again focused on one of the numerous TOP 10 lists on the Internet and the “Crustaocean” caught my eye. Real Beverly Hills. I did not even consider where the restaurant is located, but followed the descriptions for the food. And they were damn good. This restaurant suits Beverly Hills. You should not fool yourself. Newly renovated for supposedly at least ten million dollars (which you can actually see). Super chic, modern, somehow elegant, not too cozy. But wait! And I would like to submit this in advance: despite the hot spot and stars, etc., the atmosphere was super pleasant, quiet and really relaxed for an LA restaurant. No screamers, the tables very pleasantly far from each other: here you can really talk to each other in peace while eating and not feel like you’re in a silent movie, because, as in many other places in US, must read the lips to understand your counterpart.

Both welcoming bartender and waiter were extremely nice and not intrusive at all. It also lacked the otherwise annoying comments like: “great choice” or “fantastic.” The kitchen offers, in the truest sense of the word, a most successful fusion, so a mix of Asian and American cuisine. Chinese noodles with garlic, New Zealand Mongolian style lamb cutlets, sashimi. And it is not only about the crustacean.

The ingredients are cleverly chosen, the combinations not exceptional, but still excellent and thus also meant for an audience that does not like experiments — perhaps a concession to the location, although that could actually support the concept of fusion. Now fusion is really nothing new. I have not heard “lemongrass” for a long time, because it is now more common than parsley or other native herbs — but, in this case, it was just fundamental to the authenticity of the food. There is a special person cooking, one who must have a lot of experience of both tastes – the Southeast Asian and American – and so it is. Her name is Helen An.

An elegant boss, dressed in crisp chef’s garb, showed up at the end of the dinner, introducing herself politely, and asked if we enjoyed dinner. Ms. An is surrounded by a notable charm. On the one hand, she radiated great calm, as someone who has already experienced a lot. On the other hand — even if this is unusually personal for someone who writes about restaurants — one sensed a certain bitterness. Not sure if I was correct in assuming that she was originally from Vietnam, so I asked about it. One might think that the tenderness with which her food is combined and prepared fits well with her un-American reserved manner. The bitterness, however, is due to their escape in 1975 from Saigon. She was one of those in Vietnam who, after the victory of the North, was not part of the winners, but rather apparently fleeing from the “communists” to the stratum that saw no alternative. So she confirmed this during our short conversation. She has never returned, because there are still the evil Communists who have destroyed the country and taken her home. Anyone who reads my blog regularly knows about my deep connection to Vietnam, which has come about through many professional activities. My sympathies have always been more with the Viet Cong, although there is a lot to be looked at today in the administration in Vietnam. The worst is corruption, which is nothing but the betrayal of all the ideals of the men and women fighting on the winning side in the Vietnam War.

My friend Roger Donaldson and his charming wife Marlies accompanied me to dinner at Crustaocean. When I publish something here, I do not actually write anything about my work. But this time it cannot be separated from my impressions in November in Los Angeles, I allow myself this mental journey, as I have done so recently from a completely different perspective in my review of the Kreuzberger Himmel (Kreuzberger Himmel, Restaurant, Berlin). Roger Donaldson, (who has directed some fantastic films) and I worked intensively on the conception of a series about war-cameramen of the Viet Cong. This work is often like a journey in the head and the soul, one which makes you forget the actual place of work and be transported to the places of the events. I mean, I used to sit on a comfortable sofa in a nice house in Santa Monica, but we talked about the suffering of my friend and partner Nhiem from Hanoi, who had gone to war at the age of 17. 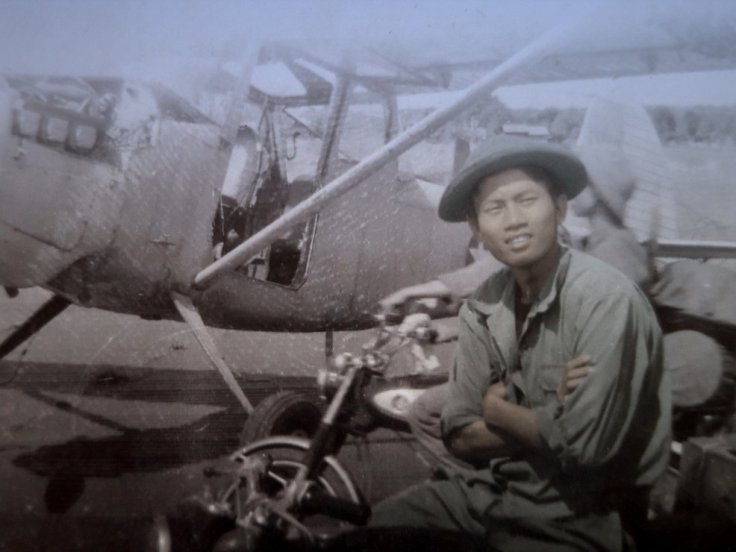 He then became one of the seventy war-cameramen of the Viet Cong and was in continuous jungle warfare for seven years. For him, 1975 was the most important year of his life: the end of the destructive war, ending the fear of being hit by a bullet in the jungle the next day. For Helen An, the crucial days of April 1975 were probably the worst, at least for her parents. How easy it is to tell two perspectives of the war, how much they determine the lives of these people. I was wondering how Nhiem would have dealt with Ms. An, or vice versa, if Ms. An had done it, with a former Viet Cong, who would surely have liked the food at the Crustaocean, to be as friendly as with us other guests. No question, Helen An is an apparition and that fits very well with the restaurant.

The food as well as the wine list (we had an every good Grüner Veltiner out of the Austrian Kamptal made by winery Laurenz V.) I can only praise and recommend in high tones, my only concern is high prices of dishes. This is not a cheap pleasure. Here is the link to the restaurant: https://crustaceanbh.com/ and the link to https://www.houseofan.com/