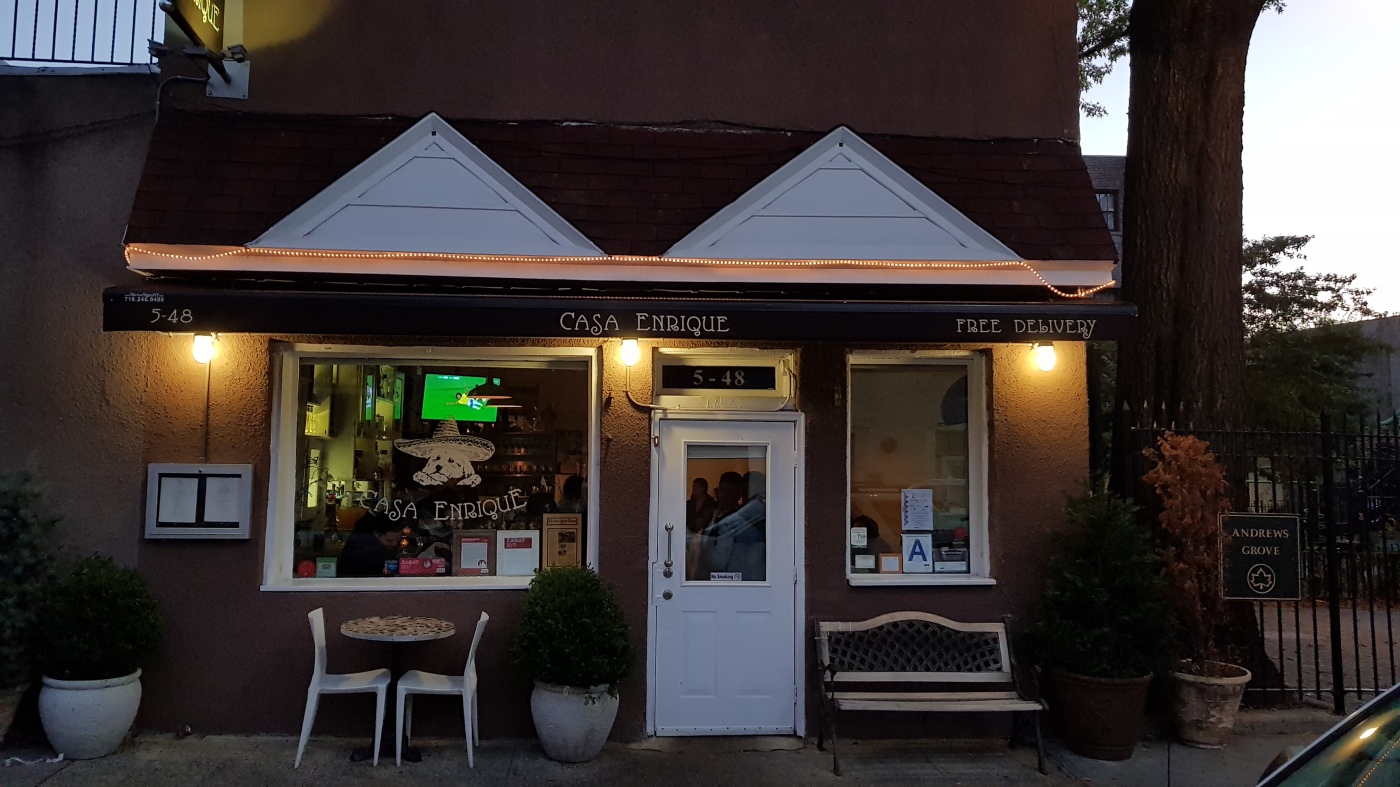 When we talk about New York, most of us are actually just talking about Manhattan. In reality, New York is much more: Brooklyn, Staten Island, Queens and the Bronx. I recently stood for the first time not in Manhattan but in Queens. Not too far away from the end of Ed Koch Queensboro Bridge —  at the Z NYC Hotel (I don’t think I will go back). From the roof, you have an amazing panoramic view of Manhattan.

The area around the hotel is – let me just say – special. Taxi garages, bakeries, craftsmen’s workshops, stores for work clothes like uniforms and safety wear – but then also design studios, exhibition halls and cool working spaces, hotels and hostels called “The Local NYC”…it is an area in transition. 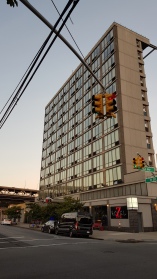 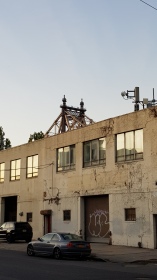 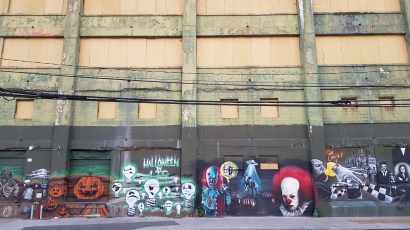 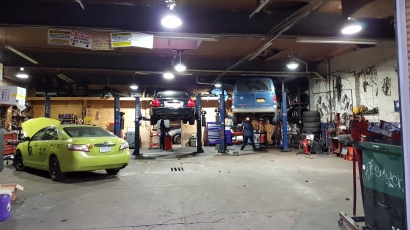 In particular, on the banks of the East River there are many new real estate developments. Those faceless glass modern sleeping towers that dominate Toronto’s waterfront as well. Although I guess it isn’t bad to have a flat there.

This part of Queens is called Hunter’s Point – although there is really nothing to hunt anymore probably for the last 200 years – or maybe thieves. A few blocks south, Long Island City begins. Some streets are so “NY” – brick buildings, may three floors high, fire escapes, wooden window frames that you slide up…. bars, bodegas, lotteries and laundries… One corner in this little quarter (Vernon Blvd. / 49th street and very close to Metro Station Vernon Blvd / Jackson Ave) is easy to find, because there is St. Mary’s Roman Catholic Church, the only one with a tower higher than all other old buildings. Cool area.

Instead of looking for some new restaurants in Manhattan, I wonder where to go in Queens. Even though I do not trust the TripAdvisor rating systems because I believe these are manipulated and paid for best recommendation (although they of course claim the opposite), I entered “best restaurants in Queens” into google. I do not know what led me to believe that google would not manipulate the results. However, among some of the first places on the list I read about a Mexican restaurant Casa Enrique: Attention! A Mexican restaurant with a Michelin star! Wow! Actually, I could not believe that there is any Mexican restaurant awarded with a star – ignorant as I sometimes am. Usually I say I hate Mexican cooking. Therefore, I set a trap for myself, no excuses anymore; today you will have Mexican Michelin food! In Queens. I called my friend David who I had an appointment with and he immediately agreed: he loves Mexican food, actually almost any kind food and was very happy to share my discovery – even more because he lives in NY.

Only hundred meters down a side street and away from aforementioned St. Mary’s, there is an inconspicuous sign on the wall of a small house with the name Casa Enrique.

Before you enter the little restaurant, you pass paper garbage and cans right there on the sidewalk, just as this neighborhood is. Nothing showy and pretentious – a simple entrance to a place that really does not look like a Michelin restaurant. It is full! You may have to wait a little bit –mostly among Mexican immigrants I guess. At least nobody spoke English – I heard only Spanish.

The first room when you enter is a bar, a TV mounted high on the wall behind the bar, loud – very loud actually – very lively. I had to smile thinking of my friend Marco Müller – a TV set in his Berlin Weinbar Rutz (Weinbar Rutz, Berlin (2. report) & “Hans”, Pinot Noir, Marlborough) and we would watch a soccer game of Union Berlin. No chance in Europe, Michelin would pass on that without a doubt.

Here, there’s no chance for a table I guess if you are not a regular visitor from the neighborhood or don’t have a reservation, either at the bar to watch a game or to get some food. We ended up at a very small white table, just room enough for food, our arms, nothing more. No real comfort, no moment of a kind of “comedown”, instead almost only one gasp after I sat down – immediately some small tortilla chips with a homemade guacamole appeared – thank god David was more hungry than me and ate almost all of it. 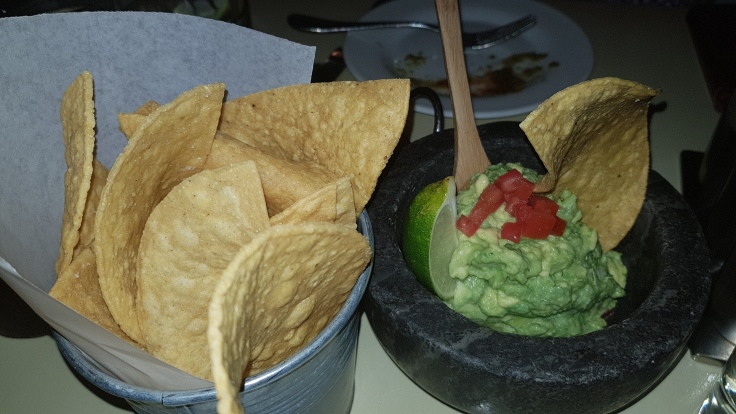 It was so good that I could have eaten it all myself, not leaving any room for the rest of the meal. What to drink with Mexican food? Indeed, beer. They have a large selection of Mexican beers – of which I did not know a single one. 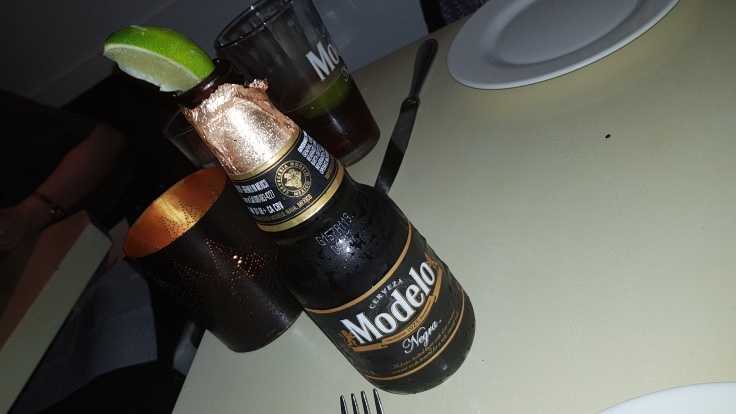 Anyhow, the waiter recommended different ones over the course of the evening, all of them were really delicious and fit well with the food. Tap water is that what the other guests were drinking, I actually didn’t see anyone with a bottle of wine. But a lot of cocktails with a lot of rum!

The menu offers a basic selection of starters and main courses of which you have some “sub” choices. Mexican food contains a variety of snack kind of dishes, so you may end up having a assortment of different sizes and styles of food. Since you can share all portions anyhow, you may order simply what you like, except when David is with you, because he likes everything and his eyes are bigger than his stomach. However, this describes it perfectly: I guess everyone who is there for the first time at Case Enrique would love to taste almost all their dishes, since they sound exciting and interesting and of course delicious.

Remember: it is Mexican food and I do not like Mexican food. I did change my opinion although I still say this food will never become my favorite. All of the dishes are prepared fresh, obviously considering the Michelin star awarded, and it is not fusion or interpretation. This is simply Mexican food at its best but rich – corn, beans, heavy brown sauces, grilled seafood or roasted pork or  beef. Vegetables are filled with cheese and rice…. Every dish is beautifully prepared – very tempting. 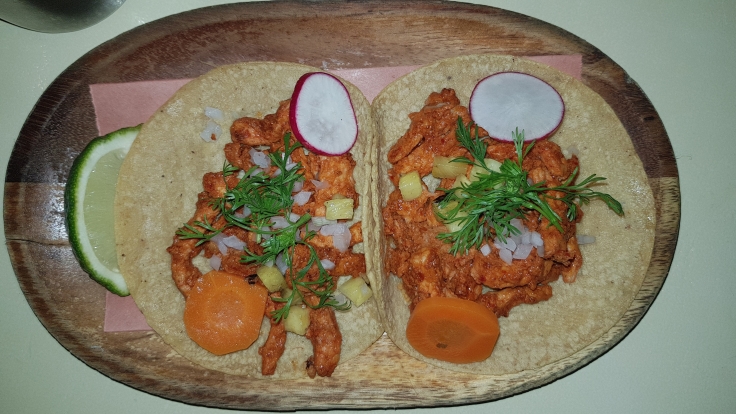 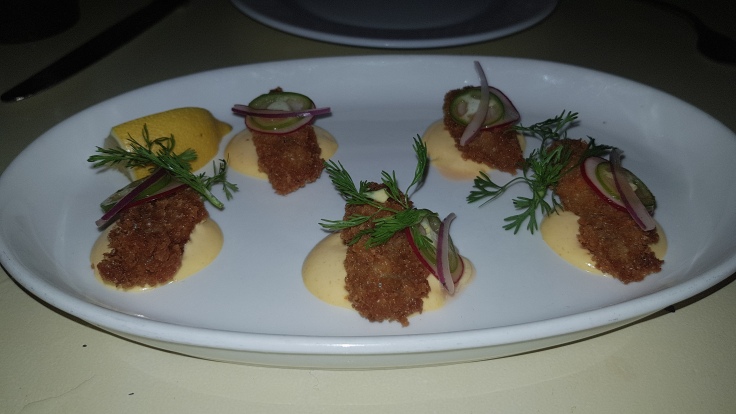 I strongly believe that many recipes come from chef’s Cosme Aguilar’ childhood and the way his mother once cooked. And if you read about him on the website of the restaurant, my thesis is confirmed, but please read this yourself: https://henrinyc.com/casa-enrique/.

To be honest, I did not write down what we were eating because I was not sure if I would write about this place. Of course now I really regret that, because it is such a unique experience, particularly if you are from Europe or Asia! We may experience quite good American cuisine in Europe (if there is something like American cooking aside from steak), but in fact, Asian cuisine, for instance, has a tremendous influence on global cooking. Central- and South American cooking is completely unknown, except of course in the USA due to a massive and growing Spanish-speaking minority that has in roots in Mexico and other Latin American countries. Mexican cooking is so diverse and rich, really something to discover. This not only applies to food, tequila, rum and beer, but certainly also to any kind of culture — literature, art, films and music.

Since this is a review even though I am not writing about particular dishes, there are two notable memories: why, why are all these restaurants always so fu….. loud? Why does everyone have to scream and shout? David says that this simply is NY – loud, hectic but people enjoy themselves. I don’t know, I mean, you simply can’t even have a conversation in this place. I probably would never really enjoy myself in such noisy surroundings, next time I should maybe ask them for a table in front of the restaurant at the entrance, where there was a small table. The other thing was the dessert… pass on it. 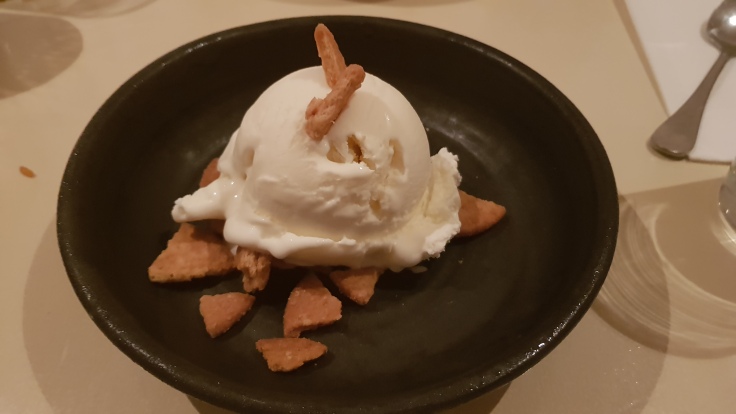 Nothing special at all – and actually the only thing that is really American at this restaurant: big, sweet, uninspiring and relatively tasteless.

But don’t let this last comment spoil my general impression! This is a great place. It is in the middle of a nice neighborhood and the chef does deserve any price, because the food is really good. 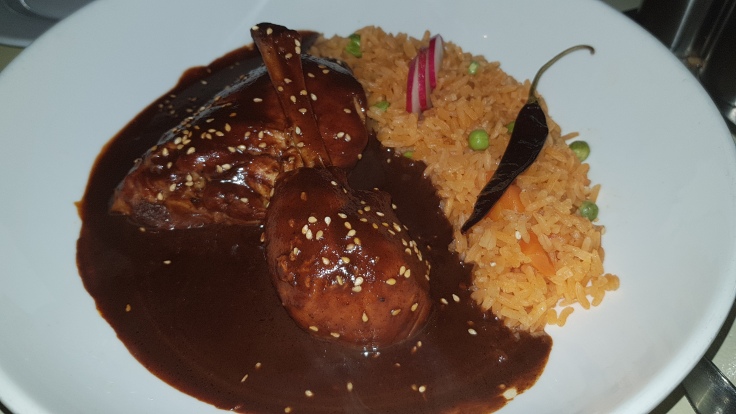 Remembering the very tender chicken legs, I could immediately return to this place for an order of them.

Last but not least: Casa Enrique is – surprise, surprise – related to Cafe Henry, a French bistro in Long Island City. It looks nice, too.