Given the lack of alternatives, some time ago I had dinner at a Mexican restaurant called Casa Enrique (Casa Enrique, Restaurant, Queens) in Queens, New York.  Even though I’m no big fan of Mexican cuisine, it turned out to be an unexpectedly great experience. When I was in London recently, I could have perhaps found some alternatives, but we ended up at an Indian restaurant — though I am also not a big fan of Indian cuisine. And? Indeed, it turned out to be fantastic. The same experience again, somehow.

It is a persevering cliché that food in England is bad. Isn’t there the famous joke: “What would be paradise in Europe? The Italians cooking, Germans constructing cars; British policing, the French making love, and Swiss organizing everything. But what would be the nightmare of Europe? The Swiss making love, the French building the cars, British doing the cooking, Germans as the police, and Italians organizing everything.” But the aforementioned cliché must have some basis. I guess if London weren’t so cosmopolitan, you would find far less interesting and inspiring food there. Actually, I am very seldom in London (unfortunately) but I have a few friends there who are fortunately into more than bad English beer and fish & chips afterwards. Those friends occasionally invite me for nice lunches or dinners, which by itself is a proof of friendship, considering the price of a meal in London. The prices are ridiculous! Food is expensive in the British capital – even if the pound went down due to the stupid Brexit idea.

Some while ago Mathias Hink invited me to a Taiwanese hot spot in Soho called Boa. It’s a nice place, the food is really very good. But, since they don’t take reservations, you have to wait an hour outside on the street before being seated. This said, Mathias was nice enough to invite me for another lunch and proposed an Indian restaurant called Indian Accent. A wonderful choice, and not only because they take reservations! It was a kind of déjà vu: this time not Mexican but Indian food. Mathias had only heard good things about Indian Accent — and for good reason. This place really was a good choice on his part. Indian Accent actually has restaurants in three locations: its home is New Delphi; another is in New York (Manhattan and not Queens) and the one I am writing about in London. What a shame that there isn’t a branch in Berlin!

First of all: I will certainly go back there, since we had to rush through our lunch due to a lack of time. So, since I didn’t make any notes, please excuse me for not writing about each dish specifically. Generally speaking, the restaurant is elegant; the seating is maybe a bit tight. The service is very polite (and I had the impression that every waiter was from a different part of the English-speaking world but not from London). Since we didn’t have much time, we chose the six course chef’s tasting menu that actually is perfect for lunch.

The basis of the food at Indian Accent is obviously Indian cuisine, although there are global influences apparent in each dish. I would not go so far to call it fusion (which applies rather to mix of Asian and Europe influences) but the chef – his name is Manish Mehrotra – is very open to any kind of culinary influences. Speaking of fusion, Manish Mehrotra actually started his carrier at Tai Group of Hotel, where he mastered the art of pan Asian cuisine (see at https://en.wikipedia.org/wiki/Manish_Mehrotra). The tasting menu did refer a bit to the concept of fusion.

The Indian Accent concept is: classic elements of Indian cuisine, not heavy, enriched with flavors from other parts of the world. Paradisiac mixtures of typical Indian ingredients and herbs from, for instance, Greece or Japan. These combinations lead to an extraordinary experience of taste and palatability. Even though we had six dishes it was really not too much. Each portion was so seductive that I would rather have had one or two more bites, just because it was so delicious. 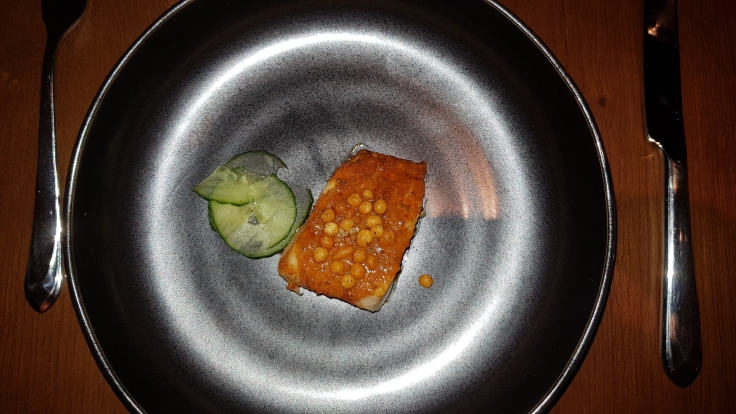 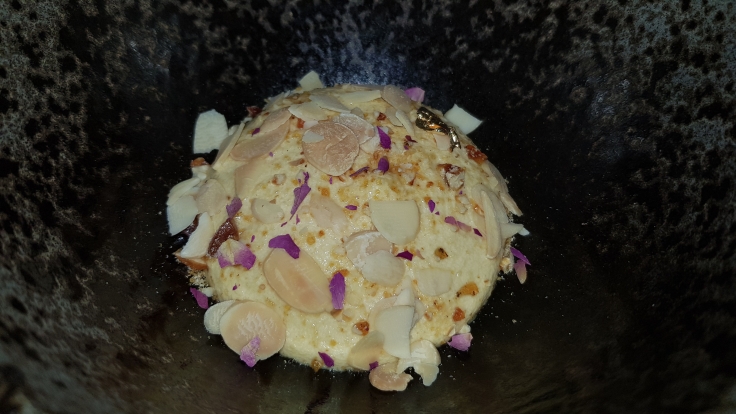 As you can see, the food only wasn’t very good, but so beautifully prepared. Rich in colors, alluring and exquisite. What an amazing lunch!

While researching this restaurant I found a review I like because the author’s experience is very close to mine – and it does provide some interesting information about Indian Accent. The writer is a professional: http://www.indianaccent.com/indianaccent/london/fay-maschler-reviews-indian-accent.php

Make sure that you make a reservation for your next delicious Indian dining experience at http://www.indianaccent.com/london/. It is very likely that the food is as good there as it would be at the one in New York while I believe the one in New Delphi must tower over the others.

Since I mentioned prices for food in London, to my surprise: the testing menu costs 45 pounds per person. Considering the quality and fortune of coming upon such a meal, this isn’t even expensive!