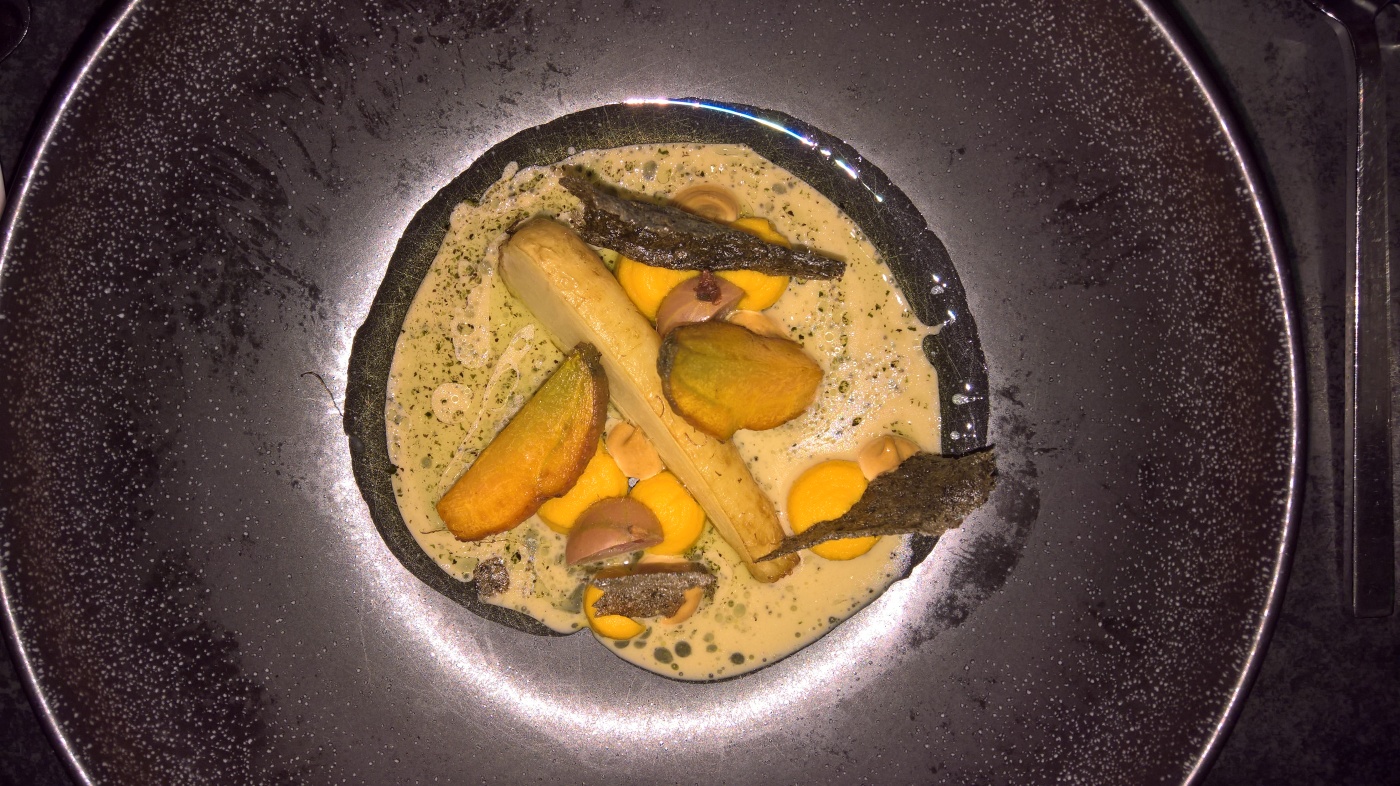 In German, we have the word „Kulinarik“. The German language contains so many substantives that describe a very specific thing very precisely. Translating this word into English is a challenge, and I am curious to know how any reader of this blog who speaks German and English would translate it. According to leo.org, one of the best online dictionaries, I should use the term “culinary art”. Although I don’t really think that this is a correct description of my understanding of “Kulinarik”, I like very much that it connects it with art. This said, Berlin’s Kulinarik has such great variety, incomparable with many other places in the world. Perhaps only New York and Chicago. A Michelin star punk restaurant, probably possible only in Berlin! 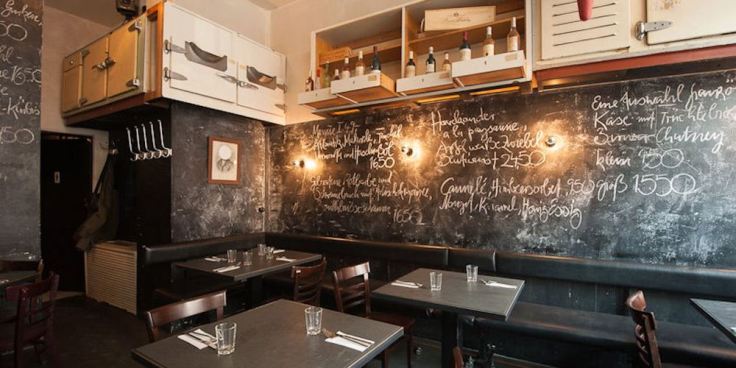 The Berlin Restaurant Bandol sur Mer is one of the smallest restaurants I know. Insofar as what I have read about it online is correct – the place was formerly a Döner shop. And they did not change too much. It only has seven rather tiny tables for all together perhaps 20 guests. The open kitchen is part of the dining room, and it is really astounding that the chef, Andreas Saul, and his team are able to create such amazing food in such a small kitchen. The main wall is used as a blackboard on which you can read the current menu. The chairs reminded me of old schoolroom seats. 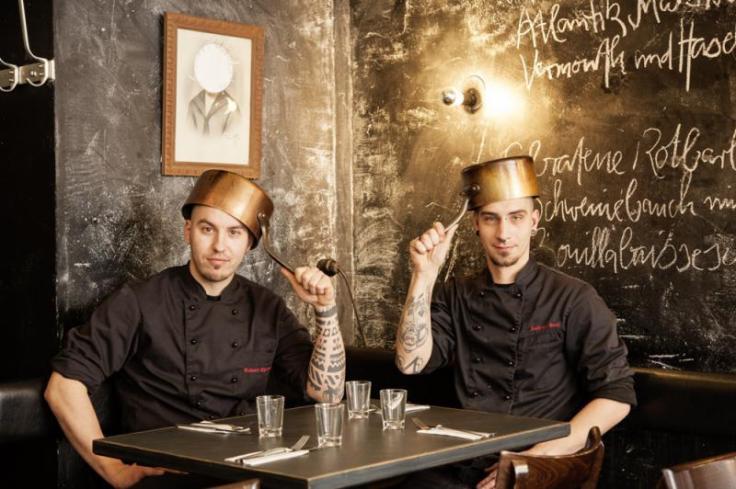 Some nonfunctional used TV sets are above the entrance and the chefs and servers are tattooed, wear black shirts – a bit like anarchists from Kreuzberg. 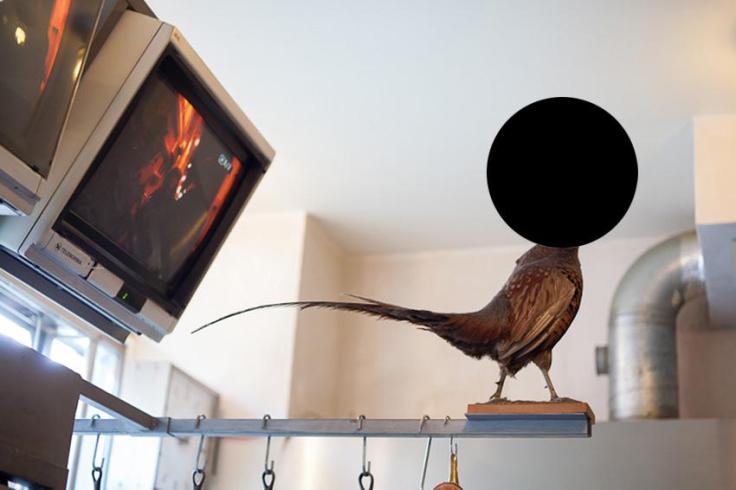 Although the name is French, it isn’t a real French restaurant. It has been awarded with one Michelin star in November 2015. The tester’s short review is: “The friendly, low-key little restaurant is the proof that down-to-earth food can also be ambitious. The open kitchen produces creative, flavorsome cuisine full of contrast and rich in intensity, which is also a feast for the eyes”. I do not often agree with the Michelin descriptions, but in this case it is perfect. While many of us expect Michelin would award only those restaurants with perfectly appointed place settings, conservative interiors, precise and classic servers, and an extensive wine list – at least in Berlin, it’s different. The quality of food is undoubtedly the first consideration. Comfort, style, and the furnishing of the restaurant are secondary.

The food is fantastic. I believe more than 60% of the ingredients are from the region around Berlin; of course they are also open to sourcing some stuff from other countries. It is not French cuisine – they create their own, individual and courageous style. Almost all dishes send you off on a great taste journey – sour and complex – a bit underdone vegetables, fascinating blots of bold flavor on each table. 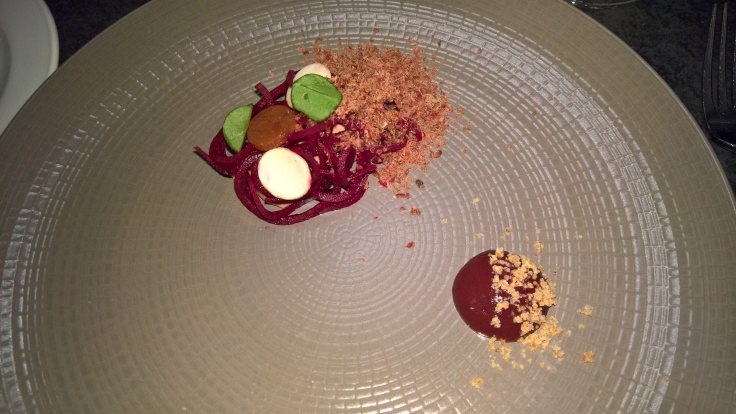 Within each menu, they combine adaptions of classic courses as duck liver paté with dried calf’s head – 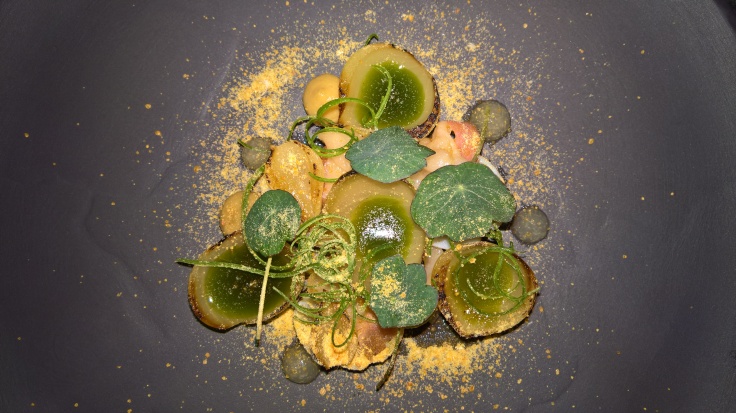 with some rather rare elements such as luce (pike) with lardo of mangaliza pork and pickled onion. 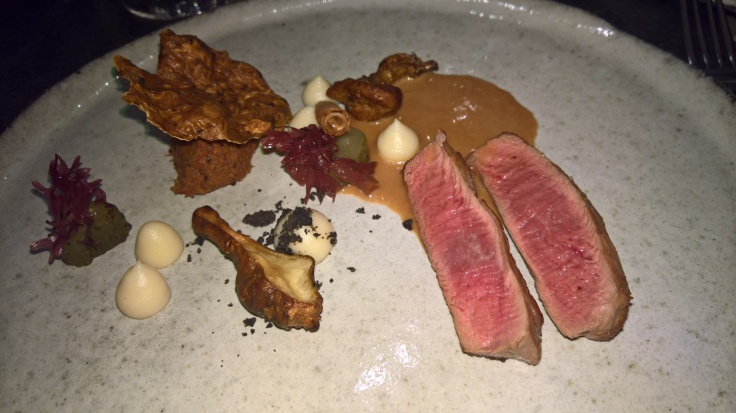 With lamb they served sunchoke, braised cucumber and seaweed. Such ideas and inspirations in coming up with these elements and combinations! And a good example is the playing on sourness along with red meats.

Actually, the only thing I didn’t like was the consistency of the meat, in particular the capon. For me, the meat could have been a bit more well-done. 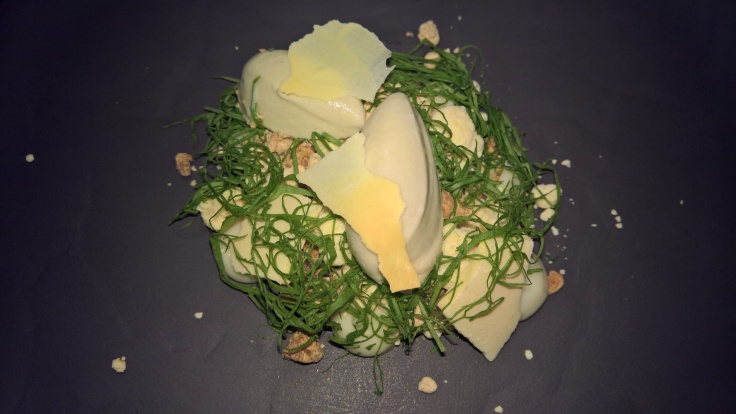 I didn’t like my dessert too much: too cheesy and sour (green rum pickled strawberries, Fourme d’Ambert and white chocolate) and admired my chaperonage, it was not only more colourful but more tasty as well ( Ile Flottante, black currant & bush ice cream). 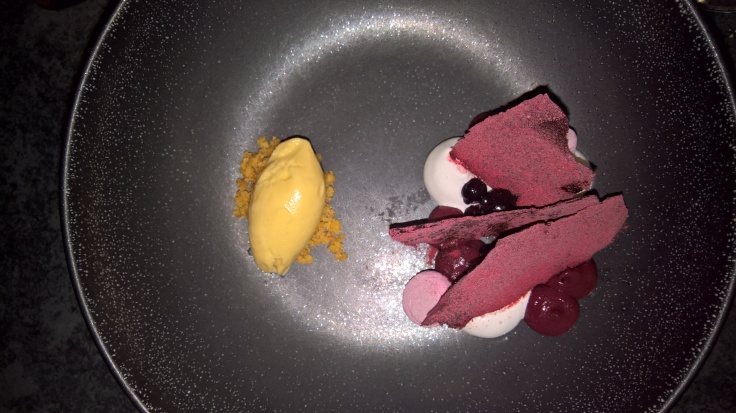 The wine list contains a selection of wines of which I  know perhaps only 5%. There are, of course, some German Rieslings. Given the name of the restaurant, they have perhaps ten wines from Bandol but also from other regions in France. I went for the wine accompaniment: too much wine, in my opinion, but very, very well selected – perfectly matched to each dish. Served and presented completely without pretension – the winery, maybe one sentence about the vineyard and types of grape. No story about the winemaker, or about the special way it was produced. All this fits the overall approach of this very smart, personable and – yeah – cool location. Andreas Saul once worked at the Restaurant Rutz (Weinbar Rutz, Berlin) on the team of Marco Müller – who just got his second Michelin star. Had I not known that Andreas had worked for quite a while with Marco, I would still have made some reference to Marco’s cooking. But, Andreas has his own style and it’s really top.

Considering the amazing quality of the food, the price per menu is very, very fair. It makes me angry again thinking about Melisse, the French restaurant in Santa Monica I recently wrote about! The food in Santa Monica was indeed fabulous, but was it nearly three times better? Because a menu there was two and a half times more expensive… Never! So please explain to me why some restaurants are so fucking expensive and others are so affordable. To everyone who once in a while is ready to spend hundred or a bit more perhaps for a great tasting and dining experience, run and book a table at Bandol. I doubt that they will keep prices so low for long. Here is the webpage of Bandol: http://www.bandolsurmer.de/fr/accueil.html.

Wonder if anyone in Bandol (France) knows anything about this punk restaurant in Berlin!