This Sushi place really represents the attitude toward life in the northern part of Hawaii’s greenest island Kauai. Chilled, relaxed, stress-free and unbelievably friendly. The real Sushi Girl is Taylor Lowe who runs this very tiny place, which is listed in many guides and has an impressive internet presence. Actually, there aren’t even many restaurants, food shops, or fast food places between Hanalei and Wainiha, the last housing estate before the Hanea State Park and the start of famous Kalalau Trail. You either own or rent a house in this area – most  people are there on vacation – or else you pass the place on your way along the northern coast of Kauai.

In my opinion, this is one of the most beautiful areas in the world, and somehow this kind of mini Sushi Girl shop fits in very well. Not only the food is YUMMY – but the area as well.

Almost all of the food is made from local fish, organic vegetables and – gluten-free (of what I would give a shit!). But it suits the philosophy that’s anchored at this place: hikers, swimmers, surfers, vacationers, runners – I would say this is the majority of Kauai’s community. 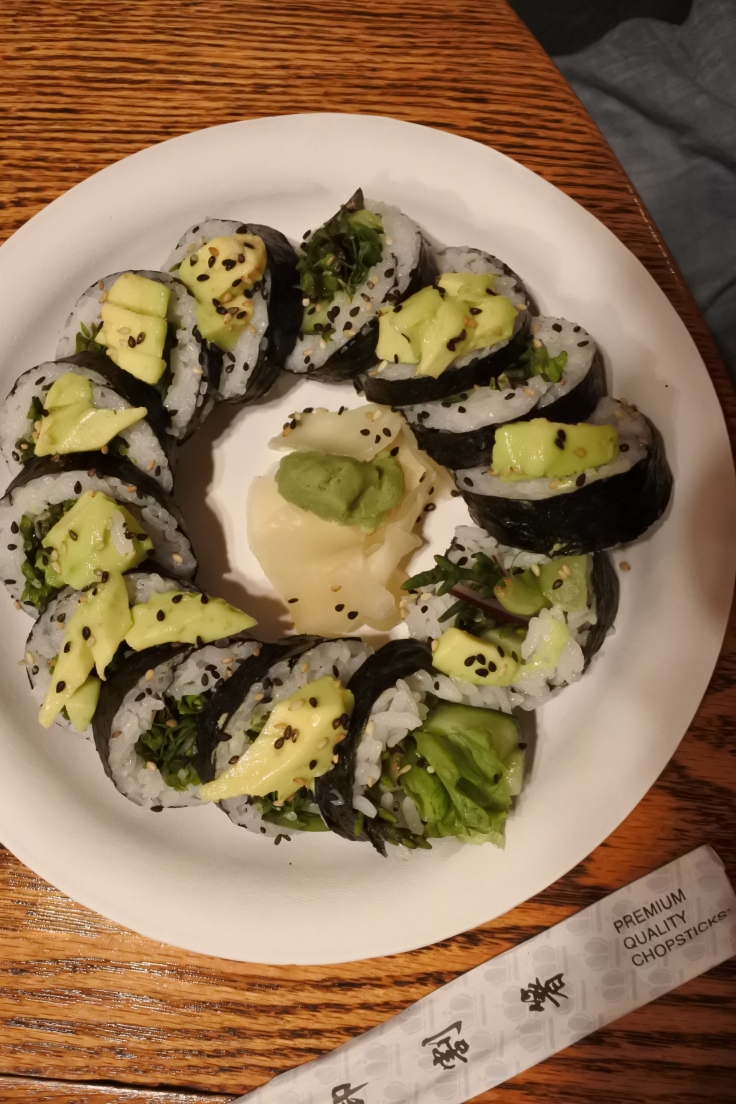 The menu is straightforward and not so extensive or varied… and it is not Sushi as we would know it from Japan. It is Hawaiian sushi: heavier than the Japanese style, some hints of Mexican cuisine (the favorite dish is “SUSHI BURRITO”) – and more green ingredients.

Sometimes at Japanese restaurants you’re afraid that the sushi or sashimi selections won’t end up being enough food, but be careful about ordering too much at Sushi Girl: the portions are huge and rich.

The fish is fresh and very tasty – in particular the Ahi! Avocado and sesame maki is in my mind somehow too hefty. Since we are not in Japan but on Hawaii, it would be unfair to make judgements on this basis. I prefer to say that this is very good local food, made with passion and heart. If you happen to be around there for a few days, pay them a visit –  you will not regret it.

Getting back for a moment to the people who live or spend time at the North Shore… Recently I read that in 2014 Marc Zuckerberg (founder of Facebook) bought a large property very close to Sushi girl – only (!) 700 acres for which he, according to Forbes,  paid around $100.000.000! His land includes a pristine white sand beach, a former plantation and an organic farm. The way he likes to present himself and his small family  – he is so social and generous, he is so green, he is so nice, he is hip. Moreover, indeed, wearing t-shirts, jeans, sneakers – he fits in very well with the community there, and I can imagine he is also a costumer of Sushi Girl. Nonetheless, now Zuckerberg has filed lawsuits against over 100 Hawaiian landowners who own small slices of his estate which were passed passed down from generation to generation – although real property ownership on Hawaii has existed only since the middle of 19th century. See more here http://www.staradvertiser.com/2017/01/18/business/facebooks-zuckerberg-sues-to-force-land-sales/.

Reading the nice introduction on Sushi Girl’s website (http://www.sushigirlkauai.fish/), Taylor Lowe writes that they support local fisherman and farmers whenever possible. I assume the understanding of “support” is different from Marc Zuckerberg’s idea of community. I wonder if Zuckerberg’s organic farm belongs to those which are supported by Taylor Lowe.

Let’s hope that the building which houses Sushi Girl and the two shops don’t stand on his land; it would be a real shame if it had to be re-located.

Finally, what’s also true is that all food on Kauai is rather expensive. I doubt local people can afford buying dinner at Sushi Girl too often.