Duong Dong – the little capital of the Southern Vietnamese Island called Phú Quoc is rich of live. Fishing, harbor and tourisms shall be the largest economic factors of the town. Consequently you can find either rather touristic places or more or less radical Vietnamese ones. Some few restaurants are attractive for both: local inhabitants and tourists which are ready looking for some other placese than directly at the beach.

Each day there is a market along the estuary of a short but quiet big river: you can get totally fresh, sometimes still alive fish, each kind of seafood but also fresh vegetables and meet.

In general you would expect that there are some really interesting and good restaurants. But I have to admit that aside of the freshness of all ingredients plus the fish the quality of cuisine was just satisfying but not too special. Nevertheless it is – I think generally – always worth to walk away from touristic miles.

The only thing you need is:  bit braveness or maybe some honest Vietnamese guide. We visited recently a inn called Song Nu at the Nguyen Hue street. It’s really typical modest if not simple buy highly frequented restaurant in the backside of the town. Even it is only few hundred meters away from the first touristic place; I doubt that you would find any tourist there ever. No English menu, maybe one or two waiter can speak some selected words in English (“same, same, but different”). If you are lucky you perhaps meet the owner of the restaurant: a beautiful, energetic and present lady who is mother of three kids (one of it studies currently in cold Helsinki!) who once wnatd to become an actress. She speaks a bit English.

Aside of fish which is obviously the specialty of every restaurant at Phu Quoc (except one which offers Czech cuisine!) – the specialty of Song Nu is goat. Goat is a very traditional dish within Vietnam. It is maybe not too visible as almost none of the Vietnamese restaurants and inns in Europe or America offer this.

Also typically for a really good restaurant or inn of this kind is the concept to get your own tiny BBQ grill on your table.

For a first dish we had slices of breast meat and some pieces of richer and fader meat from haunch. Meat of goat in general is rather tough! Therefore grilling it yourself is a great deal as you can control the consistence and tenderness and should have a great meat experience. Of course the meat in general must be good, and at Song Nu it is good. 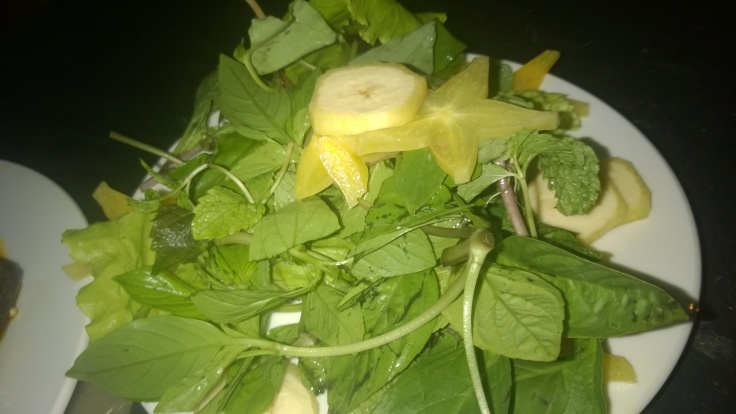 Aside of meat we good some vegetables, fresh herbs as always in Vietnam and in particular eggplants to grill as well; the most common sauce is a fishy one – maybe even from the town as there are some famous fish sauce manufactories.

The second part of our dish has been a hot pot. Entrails and the brain of our goat together with many different herbage and other eatable leaves will be put in a boiling precooked broth. After some minutes you just select that kind of stuff – of course first place the brain – you like to eat. 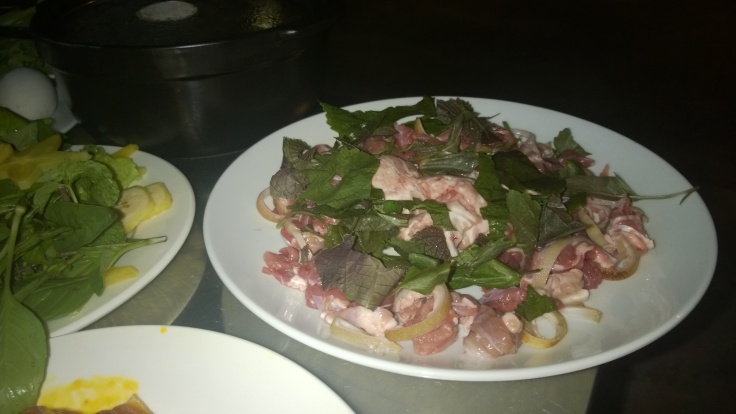 If you hesitate slurping brain (which is understandable) – you just take full ladle broth over your rice as it is really rich and wonderfully tasteful.

As mentioned this isn’t a touristic place you face the same challenge as at many other easy but great food places in Vietnam: there is no cold beer! Vietnamese very often drink beer with ice (on the rock) which isn’t so bad actually due to high outside temperatures. But as an European beer drinker spoiling beer with water is a quiet terrible imagination, a kind of a moment when one is thinking: here ends friendship! Of course water is an alternative or a bottle of Whiskey. Due to the difficulties of storing fresh meat a bit longer most of the times such a restaurant will have to use all parts of the goat rather for only a few dishes, the meal suits rather for a group of people than for someone alone.

So, if you are someone travelling at the moment in Southern Vietnam, bee brave, take your friends and enjoy this very traditional Vietnamese dish! And as always: even there are adhesive labels of Visa or any other credit cards – they don’t take cards! Modernism is visible but not real to be experience!