Once I am driving long distance I try to avoid having a brake at the most of Autobahngestätten / Fast Food stations along the highway. I rather take some exit on the way and get into smaller towns or even villiages for a restaurant or local inn.

Last time I ended up in Melsungen, ca. 30 km in the south of Kassel: A beautiful spot, probably really interesting for someone who likes middle age towns. Melsungen has a historical center with lovely Fachwerkhäuser / half-timbered houses.

Anyhow: looking for an Italian place we found La Cantina. Located in a historical half basement equipped and decorated with “love” – I mean with some personal commitment by the owners. Not without taste, perhaps not my taste. To avoid a misunderstanding: it is comfy and functional in one.

Listening to whispering guests at the next table while we studied the amazing rich menu I heard that people of this area braise the place as the best in the region. Either they all have rather poor taste or no knowledge about real and good Italian food. Even I would never expect a “high-end” Italian restaurant in such a town, but La Cantina food wise is not a good place unfortunately. If this restaurant would be in Berlin, you could consider it would be run by Albanians but La Cantina is owned by an Italian family – classic immigrant from the seventies – and the boss himself cooks.

Aside of my dish the rest was rather classic and easy: Mozzarella, Pizza Margarita, Spaghetti Bolognese… 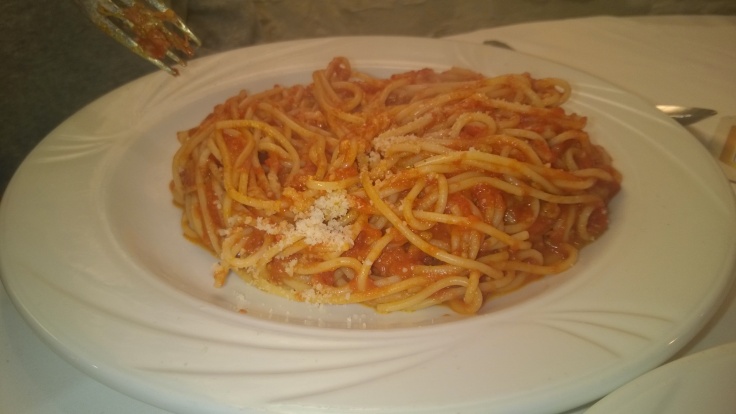 the only a little bit more ambitious one has be tagliatelle with a gorgonzola and champion sauce. I guess the picture says all about it. 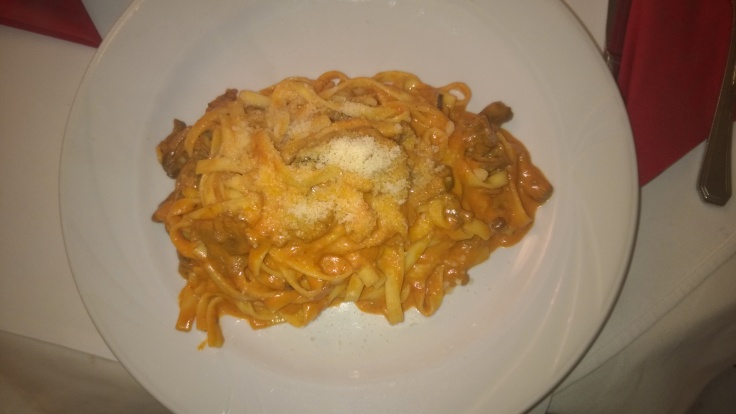 Over heavy, much too much cream and such one much too sweet taste artificial tomato flavor. No gorgonzola at all, considering the strong character of this tasteful cheese.

Still, the food probably was better than at many inns along the Autobahn! And the discovery of Meslungen a nice surprise.