It took me a while upon this review. I slowly got my thoughts and impression into something you can read: My master of wine – Billy Wagner – and his partner Micha Schäffer succeeded generating a remarkably positive hype about their new restaurant called Nobelhart & Schmutzig. Not everyone has expected this as it is an unorthodox but dogmatic concept which they are following. Without real compromises, the sitting arrangement, the way of cooking and obviously the selection of wine is unique in Berlin! It takes you almost your breath when you get into the place first time so inspiring and even for Berlin standards unconventional it is. Some critics already wrote that it nuts to need ringing the bell to get access to restaurant as the door is locked. This indeed is pretty seldom in Berlin but probably also a concession to the interior because a wall between entrance and the sitting areas provide snugness for those who otherwise would have the door in their back. 28 seats along a three side counter which goes around an open kitchen and the bar. 14 seats on big table. Cool music out of gramophone records…

Mentioned hype let grow expectations. I do not know what all of them have eaten who wrote this place to heaven. Or are they just impressed by the basic concept as I am and refrain critical review? Did charming show master Billy Wagner lull them so much that they lost any kind of soberness or objectivism?

When regionalty isn’t only the concept but becomes dogma of a restaurant then you can experience this very well at Nobelhart & Schmutzig. To be very honest: the food was a smidge disappointing. There wasn’t one real highlight and it is regrettable still far away of what I would call a rop-flight cuisine. It is not the matter that you haven’t any choice as there is only one daily menu, it is the way how it is prepared. The only one menu is certainly also a concession to their concept being regional and always fresh, but it is also a relevant economic advantage. Otherwise it is risky, too, as there may be coming guests who would love some more variety depending to their mood.

Maybe one of the chefs was just unluckily in love since the half of dishes was too salty for me.  In return other flavors and smells and herbe were too thin, simply too less. The menu which I eat this night lacked balance which could have made it to a pleasurably eating experience. I rather than picked up some pieces separately and without the mentioned concept which you call extravagant and good. 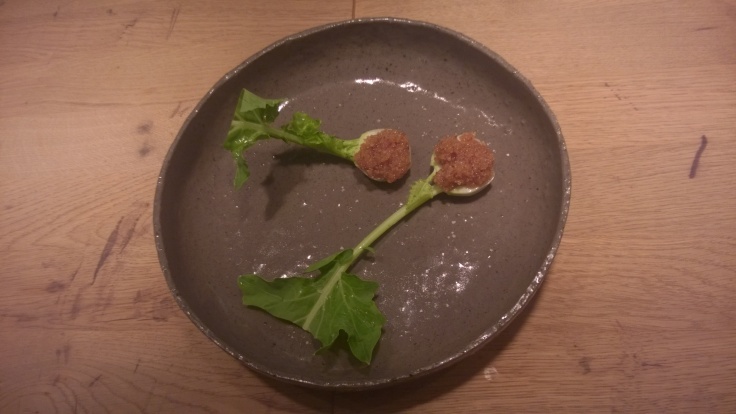 To make this story short: most of combination and arrangements are convincing up to a certain extent, in particular because it follows a clear and uncompromising concept which is rare but positive in regard to food and wine. All ingredients are very fresh and come out of an area of less than 150 km. There is a lot of courage to work with almost died but great vegetables as cabbage, kohlrabi, local mushrooms, rowan berries or elder and many more. As easier the dish was as more I enjoyed it.

Tea or soup: both somehow – a sud of carrots, along with chamomile and a lot of caraway: all on over some cream (which isn’t visible)

We had more courses as another soup and very yeast driven dessert which I really liked a lot.

Of course wine is the other passion of this place! Billy Wagner always has some surprising new and unique wines. Often very unconventional, organic and just discoveries! Writing this I just wonder if maybe the cooking follows Billy’s wine ideas. It is a great pleasure sitting on the bar tasting different wines listening to Billy’s stories. Some of them are coming along very nice with the food; some others are just a matter of guest’s comments. Billy always hears carefully to the wishes of his guests and doesn’t hesitate to open another bottle. Even I could believe that Billy selected wine along the personality of his guests.

The discovery of the evening! Les Dolomies: a very dynamic, cheeky wine from the Jura area in France. Too young, but a very interesting and special wine!

It is more than worth to visit this restaurant!  Billy and his team will put all efforts to make the restaurant even more better. Of course I will come back with a lot of pleasure. Here is link to the restaurant is http://www.nobelhartundschmutzig.com/. It is better to make a reservation since the restaurant has a limited number of places and as mentioned very popular. The restaurant is located on the district border of Mitte and Kreuzberg at famous Friedrichstrasse.

As a new note, added to this article at November 14th 2015: Nobelhart & Schmutzig just has recieved one Michelin Star!