Beautiful location, great architectonic and stylish building above the beach of Hossegor (30-40 km in the North of Biarritz) – so your expectation are reasonable high as the internet is full of some ecommendations, too.

Unfortunately the welcome was modest if not reluctant. Although we reserved and asked for a table at the terraces which was rejected with just the comment all outside tables were reserved by others. In the case these tables were reserved indeed, the restaurant would have had some “no shows”. Anyhow and finding peace with it right at the beginning, it became a pretty chilly night and we would not have been too happy all time outside. Another – call it – challenge is that there is no English menu but many employees who don’t speak English. Please do not take me wrong: I am not expecting in any restaurant of the world English-speaking people. Taking the ambitions in consideration the place transports via its presentations and appeal I highly would recommend to teach at least one waiter English. I am sure many other guests would appreciate this very much – at least an English translation of the menu. I would have had the opportunity knowing what the restaurant’s chef Patrice Lubet created.

We selected four different menus: two dishes a la card, one vegetarian menu, another called Homard et Crustaces and last but not least Menu Dégustation. After this order I asked the sommelier for a suggestion of a local white wine respective a wine of the region. We got an organic white of the Domaine de Soug called Jaracdegon from 2013: sour, fresh and mineralic. Since as appeared later the main flavor of almost all dishes of each menu has had sour notes the wine was well-selected. It was an addition but not a counterpoint which I probably would have preferred. The red-wine was a Chateau Haut Peyrous-Retour of 2008. A nice wine.

The food itself was first of all interesting, partly too experimental but other parts extraordinary and very good. The compliments from the kitchens as greetings were fabulous, refreshing, exciting and let you expect some real remarkable food. Unfortunately do my missing French-speaking capacities and no availability of any waiter to explain what it was I need to let speak the pictures by themselves:

The biggest disappointment actually was the vegetarian menu: it was less inspiring and not too versatile. Considering summer in South Western France you would have expect some more vegetables than Aubergine and Zucchini on a BBC sauce which by the way appeared with some other dishes as well (and I didn’t like it!).

The main course “Risotto de Pommes de Terre à la Sauge” was great – although a little bit difficult to recognize what you were eating.

Some Selections of the menu: Homard et Crustaces

The tail of lobster was really delicious and very well presented as you can see a little bit more below again. The combination with the aubergine, in particular the decision to put into the middle requires further explanations as it was of course the lobster which highlighted this course.

And one selections of the Menu Degustations: 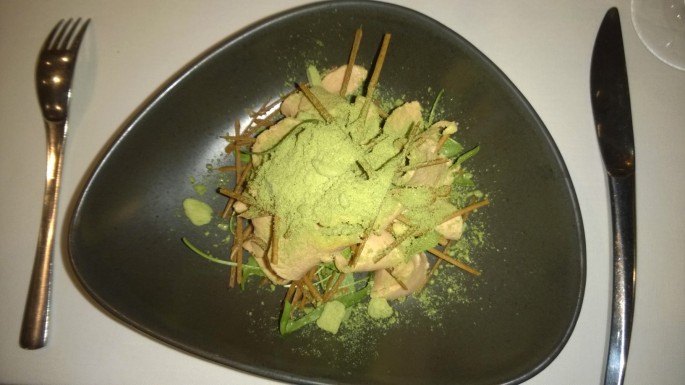 This was maybe one of the most ambitious, doubtless very interesting but also too experimental combination I had since long: below a kind of very thin slights of Foie Gras there was one shelled oyster. The small sticks tasted after cinnamon, the green was a bit wasabi and greens. Each element was perfect but the really risky combination rather challenging.

A la card we ordered Anguille Fumée – Pâte de Pipas, Shizo et Oignons Condimentés, which is smoked eel with Shizo sausages and onions. This was a great dish!

Last but not least the desserts were a conciliatory ending of the dinner. Cheese, “Soufflé Chaud – Chocolat et Armagnac” (don’t order this for your kids (!) – too much alcohol in it) and “Caramel Salé – Millet Soufflé et Céréales” were all very, very good.

It isn’t really easy to evaluate and point this place. Although the location is really beautiful, the design very good the atmosphere wasn’t. Everyone was somehow too reserved, not too polite frankly speaking. I would have been so much happier if someone could have explained me what I was eating since the cooking is very ambitious as mentioned. More 3/4 of all dishes had some sour flavors. To much in my mind.

I cannot recommend this restaurant if you like to get just really good food in a nice and casual atmosphere together with your family. It isn’t too expensive although it is not worth to spend so much money if your kids for example or maybe yourself just expect straight forward, excellent cooking. If you are a couple with a lot of eating experiences, you would like this beautiful view and a some good wine, you would not repent your visit.

Find more about the restaurant at their nice webpage: http://www.jeandessables.com/. The restaurant is noted at Michelin Star but Patrie Lubet not yet has one.