Sometimes there are moments when you are tired and exhausted. You look for something that will make you happy because you want to treat yourself. The very best wines of the world aren’t suitable for these moments, since you shouldn’t really drink expensive or extraordinary wine when you’re so fatigued. Outstanding wines are elegant and should be enjoyed at the right time, perhaps along with some very good food as well as, probably, with some friends. Cosimo Taurino is the perfect wine for what I’ve described above, it is only for you: it is rich, heavy, pretty voluminous and has quite a bit of alcohol (14,5%!). 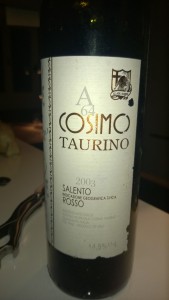 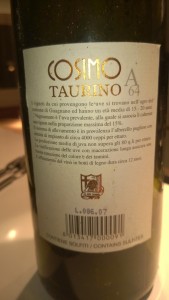 The wine comes from the area Salento in Southern part of Puglia, Italy. The dominant grapes in Puglia are Primitivo and Negroamaro. Aside from plenty of table wines for daily use, some selected winemakers in Puglia are producing some reserves which are quite remarkable and still relatively unknown. Although wines from Puglia getting more attention, it is still seldom that you find wines from Salento or Castel de Monte area on menus and wine lists.

In my perception, there are some ambitious and aspiring winemakers in Puglia which intend to step out ahead or even distance themselves from populace of ordinary wine-makers. They are smart in marketing and they benefit from the new popularity of Puglia as a holiday and travel destination . The winery Cosimo Taurino definitely does not belong to those. The home of Cosimo Taurino is a dusty and inconsiderable spot called Guagnano between Lecce and Taranto. Without knowing that this winery is in the village, you would never stop here. This means a lot since so many villages in Puglia are beautiful and certainly worth visiting. If you ever thought that winemakers are only in beautiful, stylish or manor-like houses, you’d better not go to Cosimo Taurina. At the border of the village there are a few agricultural and semi-industrial buildings, storage and manufacturing houses made of concrete. It seems that the agricultural firms, farmers and also winemakers once got a big chunk of money from the European Union, which they used effectively to build overly large estates.  I parked my car on a parking lot bigger than a football field in front of a huge production hall (similar to a smaller fair hall). No being sure really if I was at the right place – there aren’t any signs – I entered this hall which was almost empty.  A person passing at the other end of the hall waved to me. I followed him, not knowing if I was understood correctly, as I just wanted to buy some wine. After endless walks through some further smaller halls and gangways I ended up in the only really tiny part of this assemble: it was the headquarters. There were perhaps ten Italian-only speaking people sitting there, but among them obviously the daughter of the vinedresser. It must have been very bizarre and unusual for them to see a sunburned German searching for their wine. Somehow I succeeded in telling them that I liked their wine, in particular the “A 64”, and as a result managed to fill my car with many cases of wine. At the end it became a great journey as I got a remarkable discount and ended up with a car full of rich, heavy wine!

I probably wouldn’t store this wine much longer, as it is perhaps already a bit too late to drink the vintage of 2003. Nevertheless, the aroma of this wine is full of mature and dry fruits, sweet cooked confiture cherries and perhaps some tobacco. The wine is aged twelve months in barrique, which results in a great balance and the taste of a reserve.  Negroamaro is the dominant grape, but there is Cabernet Sauvignon in it as well. That should give the wine an international appeal. I would recommend drinking this wine a little bit colder than usual. The colour is a deep scarlet.

Again, such a wine at the right time can be fantastic. But it isn’t anything for a gala dinner or selection of the best wines of the last ten years. It is nice to unwind with – it is rich with the flavors of a sunset: you will say: yes, I deserve this!  Although it might be bullshit, but this wine is more for men!

I found only one website which offers the wine if you wouldn’t drive there: http://www.clubviniitaliani.co.uk/cosimo-taurino-a64-super-puglian. It is surprisingly expensive. There is a German wine store which offers other wines of Taurino: www.bremerwein.de.

Another review of wine of this winemaker you can find here: https://avdwineandfood.net/2015/06/01/patriglione-salento-2001-cosimo-taurino/