Open and visible kitchens as the center of restaurants have become more and more popular. As long as the cooking doesn’t become just a show but you experience still very good food, it is a very enjoyable concept. Wherever, either in Warsaw (https://avdwineandfood.wordpress.com/2015/02/28/restaurant-u-kucharzy-w-arsenale-warsaw-poland/), in Berlin (Nobel & Schmutzig) or in Moscow (Vostok) there are still individual ideas giving those places a special character.

Usually there is one person in particular who stands up for such individual ideas. It could be the owner, the sommelier, of course the chef or maybe even sometimes only the barkeeper. So called Chef’s Clubs are driven by the idea that you have the chance to choose out of dishes or meals of different chefs at the same place. These chefs are not constantly working at those restaurants but come as guests and stay a while.

The place I recently went to is a combination of a visible kitchen and the concept of different chefs named Chef’s Club by Wine & Food (which is not my blog J!). It is in Manhattan.

We were seated at a board in front of the kitchen which dominates the hall of the restaurant. This place let you participate cooking as you can watch the work of the chefs, their pupils and helpers. In the case that you come with a bigger group, there is a nice sitting area – still close enough to the open kitchen but obviously not comparable with those seats we had.

In certain ways the composition of the restaurant is very New York: brick walls but very modern elements, excellent lighting, gemütlich but also a little bit glamorous. The only – but also so typical -drawback is the acoustics of the place. It is just too loud.

This isn’t fortunately a place of hundreds of “specials of the day” which you never catch not being an American speaking person. You get a menu with a reasonable number of choices, nicely balanced among some experimental and rather basic proposals. 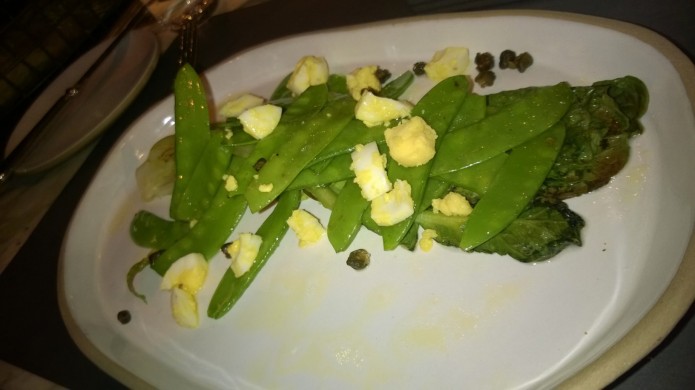 Main courses (or as they called Entrees):

Everything was perfect: interesting and very tasteful combinations of different aromas, a bit of sourness, modern mixtures as it was really without references to any national cuisine. The portions are much bigger than you would expect in such a place. My filet was extraordinary if not outstanding. Consider you got this in New York which is the town of best steaks in the world. But this was more than just best of New York, it was beautifully soft – but I guess not because it has been aged –  but because of its preparation. This piece of meat was very probably in the oven for a long time at a low temperature, and then only grilled very briefly. Extremely delicious I must say.

Even I didn’t try it already from a visual point of view the lamb chops were fascinating: Pear and white beans along with lamb, I think everyone can imagine the flavor.

The restaurant has a very fine wine menu. You will find really rare wines on it. Rare not in the meaning of something extraoridinary expensive from Bordeaux but rare in the meaning of wines of small producers. That person who collects wine for Chef’s Club does a very good job. There is a nice selection of German Riesling on it, even a Movia from Slovenia but also for example COS and OCCHIPINTI from Sicily. All wines are very fairly priced!

The desserts are inspired by American sweets! 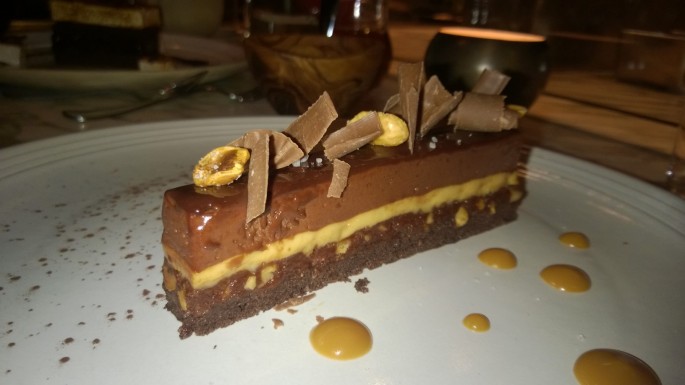 This one is called CANDY BAR and contains of chocolate, caramel and peanuts. You would expect something very heavy but one is wrong. It is rich but not causing a complete “filled up” feeling.

There is a good webpage of the restaurant: http://www.chefsclub.com/new-york/.