So this time I’m talking about a restaurant in Taipei that I could actually eat at, and which I really liked. It’s called Hutong Yakiniku and is one of several in Taipei (and if I am not mistaken, there is a branch in Beijing, too) – the Bade Road Branch. Again, it is difficult to find references online in English; both the website (http://www.hutong.com.tw/store.php?cid=2&id=4) of the restaurant and the FB page are available exclusively in Taiwanese. Maybe it’s just out of western arrogance that I’d wish for broader language skills. Nevertheless, it is also curiosity, because the restaurant is absolutely recommendable.

I felt like eating meat that day, was tired of running around for hours, and was more in the mood to go to a non-experimental location, but one which still fit well with Taipei. In addition, one that was not too far away from my hotel (Artree Hotel), which I’ve already praised in a previous review.

Hutong Yakiniku is, on the one hand, a Japanese BBQ Place; on the other hand, it is a restaurant “around the corner” and is certainly visited frequently from the immediate neighborhood. The products offered at Hutong Yakiniku are of the highest quality and, contrary to the typical Japanese BBQ, there is also a wide range of pork and chicken. Fish, however, not really. And! They have a menu in English, which was actually not so important since most of the food consists of “ingredients,” — meat or vegetables which you can also choose from the pictures.

Usually you would need a reservation. Because I was alone, after about 30 minutes of waiting, I was able to squeeze between two couples on a stool at the BBQ bar and enjoy the wonderful atmosphere. It is somewhat fascinating: There is no identifiable hierarchy among the staff behind the counter, everyone is doing the same things at the same time: serving, preparing, barbecuing, rinsing, rinsing, running the dishwasher and clearing and collecting. Everything is in harmony, although a certain hustle and bustle prevails, the high level of activity is refreshing and also provides wonderful entertainment, especially when you go alone in a foreign land to eat among not only strangers, but also when you don’t understand a single word of the language and have to admit that the prevailing culture is truly alien to you.

It is certainly quite loud! As soon as someone places an order, it is called out and immediately somebody starts to prepare the dish. But one after the other: After you sit down, you may order a beer and look for your first things in peace.

As a starter, besides raw meat, there are some sushi-like options. I ordered raw clams, without really knowing what I had ordered. It was delicious, even though I know that many of my friends would have made faces at the sight. As a side dish then, a selection of meat pieces and varieties, 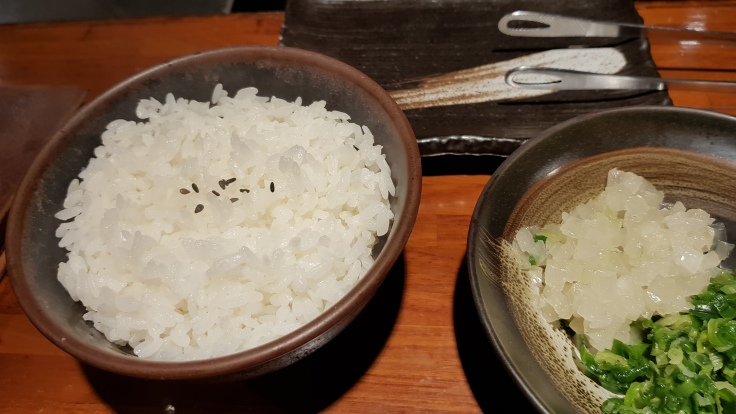 I ordered raw cabbage leaves and rice. Both very delicious, especially the cabbage. In the meantime,

a handy little barbecue is placed in front of you. You either let the staff take care of the grill or you do it yourself. If you prefer medium-rare meat, you probably have do this yourself since another order perhaps distracts the waiter for just a moment — but “the” moment.

On the back wall there is a cupboard, which must be very, very hot, in which the burning coal is stored. This is perhaps this only job that not everybody is responsible for, since it’s quite dangerous.

And then a selection of meat is grilled one after the other, depending on what you have chosen. I chose pork and some different cuts of beef. The meat served here, usually bred ad raised in reference to Wyugo Beef, came, contrary to my assumption, mostly not from Japan, but actually came from Taiwan. A delicious meal in any case, and if you are still not satisfied after many hundreds of grams of meat, you can just continue ordering. One of my neighbors ate unbelievable amounts; admittedly, he was not very slim either. His girlfriend or wife continued to feed him, knowing that at home she would be tucking a happy fat sack into bed to devote herself to her uninterrupted favorite pastime: savor all the features and apps of her smartphone.

Maybe this glutton also owned the cool yellow Porsche, which was parked in front of a yellow wall in the immediate vicinity; though he probably didn’t fit fin it or the drive home.

After my meal I ordered a Japanese whisky that was very flavorful, and was an excellent finish to this visit, which altogether was a great experience. The meat and side dishes are all of great quality, the service extremely friendly, and the atmosphere at the bar entertaining and wonderful. A place that I can highly recommend and that, should I ever return to Taipei, I would immediately go back to. If there is not much else to discover in this exciting city. See the privous review about Taipei here: 鷹流東京醬油拉麵蘭丸, Ramen Kitchen, Taipei